. 8.         Classify the following crops according to their form uses and life span.

BEHAVIOURAL OBJECTIVES: At the end of the lesson, pupils should be able to:

A chart showing all farm tools

Behavioral Objectives: pupils are familiar with the topic in their previous classes.

Soil is basically formed from rocks through a process called weathering. Weathering is the breaking down of rocks by such agents as water and wind to form soil. 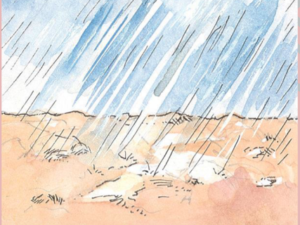 The rock particles, which are dark in color, mix with organic matter to form humus. This type of soil is very fertile and is good for growing crops. Rain also falls on dead plants and animals, and helps in their decay to form soil.

Rain is water that falls in drops from (rain-making) clouds in the sky. When rain falls on mountains and hills, it washes downhill the broken rock particles,

which help to form soil at their bases. It also breaks them down into rock particles.

Rainfall causes leaching, which dissolves minerals such as carbonates in the soil. The rain then washes them deeper into the soil. Other things that affect soil formation include parent material, living organisms, topography and time.

Temperature is the measure of how hot or cold the atmosphere is at a particular time of the day or night.

Rocks expand and contract as they heat up or cool, breaking them apart. Temperature controls the rates of chemical weathering (when water interacts with minerals in the rocks to create chemical reactions). Chemical weathering happens much faster in warm places.

The wind is also able to move surprisingly large quantities of soil. On occasions fine soil deposits can be seen which have been blown all the way from North African deserts.

Man can also aid in formation. This happens when we break parent rocks which will in time form soils

Man breaks up rocks with pickaxes or hammers. The small pieces of the rocks collect to form soil. The man also uses heavy machines to crack rocks into small pieces which form soil. 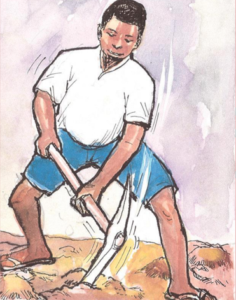 These animals may carry some dead leaves and grasses into the holes as beddings. When rain falls on them, these dead materials decay to form soil. Some animals dig holes in the ground and live there. When animals dig holes

in the ground, they cause physical damage to rocks to form soil. Examples of such animals are the rat, cricket, and earthworm.

Living things influence soil formation in many ways. Plants, microorganisms, animals, and even humans can make a difference. Once a plant community

becomes established, it has a big effect on soil development. Tree roots penetrate deeply into soils, bringing up minerals and incorporating them into organic matter. Grasses penetrate less deeply but have increased biological activity and more rapid nutrient cycling.

Some trees grow in-between rocks. Their roots help to break up rocks into particles that form soil.

Earthworms and other animals tunnel through and mix the soil. They aerate the soil and allow water to penetrate more deeply. Humans also influence soil formation.

1. Ploughing: Man clears the vegetation on the land. He leaves some to decay on the ground to form soil. He puts some in the soil in the form of manure. All these decay to form soil. 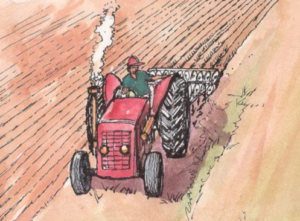 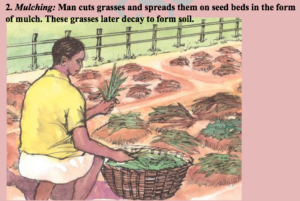 Animals, such as termites, eat dead plants and change them to soil through

WRAP UP (CONCLUSION): The teacher goes over the topic once again for better understanding.

TOPIC: CLASSIFICATION OF CROPS AND THEIR USES

BEHAVIOURAL OBJECTIVES: At the end of the lesson, pupils should be able to:

A chart showing all farm tools

Behavioral Objectives: pupils are familiar with the topic in their previous

CLASSIFICATION OF CROPS AND THEIR USES

Farmers plant many crops. Examples are maize, rice, tomato, pepper, okra, kola nut, beans and groundnut. We can classify all crops in various ways, mainly: according to forms and lifespan and according to types and uses

The lifespan of a crop, however, is the average length of time that it will live. For example, some crops, such as yams, may live for one year. Others, such as oil palm, may live for many years.

Crops differ in their forms and lifespan. The form of a crop is the arrangement of its external parts (its parts that can be seen) in such a way that can be used to identify it. For example, a bean seedling has its parts arranged differently from a maize seedling.

There are two major forms of crop plants: monocotyledons and dicotyledons.

Monocotyledons or monocotyledonous crops are crops that have one seed leaf buried in the soil after germination. An example is the maize seedling. The seed provides food for the plant when it starts to grow.