Subtitle: Creating a drama stetch from a story or folktale

Learning Objectives: At the end of the lesson pupils should be able to:

1 explain the meaning of play creation.

3 create a drama sketch from a given storyline or folk tale.

Resources and materials: CULTURAL CREATIVE ARTS for Primary 3 by A K Badaru

Building Background/connection to prior knowledge: pupils are familiar with home videos.

Play creation means writing a play or making a play. Drama is another type of play. There are different steps to creating a play. A play needs a good idea. The idea makes a story. We create plays through the following ways.

2 Improvisation: Improvisation is the acting of a play without a script. It is the creation of a play from narration of a story or an idea. The narration of a story is also called storytelling. A narrator tells the story or idea while the actors provide the dialogue (words to be spoken), movement, and action. The actors are the people doing the play. Because there is no script (written play), the words and actions in the play (improvisation) may change from time to time.

How to create a drama sketch from a story

A drama sketch is a short play. It may last about five to fifteen minutes. The steps to creating a drama sketch from a story include:

Step 1: Read the story and understand it.

Step 2: Read it again and write the names of all the people that are in the story. They are called characters.

Step 3: Read the story again to know what each person said.

Step 4: Write out what each person said beside their names.

Step 5: Arrange the names and what they said according to when they said it.

Step 6: Also try to know what each person (character) did each time in the story.

Step 7: Write the character’s actions beside each dialogue. Write whether they are walking, eating,   crying or talking with someone. 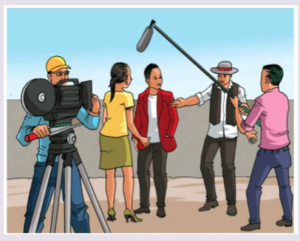 Wrap Up (Conclusion): Teacher goes over the topic once again for better understanding.

Subtitle: Creating a drama stetch from a story or folktale (practical)

Learning Objectives: At the end of the lesson pupils should be able to create a drama from a folktale

Resources and materials: CULTURAL CREATIVE ARTS for Primary 3 by A K Badaru Obebe

Building Background/connection to prior knowledge: pupils are familiar with the topic in the previous classes.

From grass to grace

John and James were brothers. Their parents died when they were young, so they stayed with their grandmother who was very old then. Their grandmother also died not long afterwards. There was no one to take care of them. So they decided to leave the village and travel to Lagos. John, the younger brother did not want to go. He was afraid but his elder brother encouraged him. Before they left for Lagos, they visited Mr Biu.  Mr Biu was a soothsayer and he had been their father’s friend when their father was alive. He offered them a little assistance but he was a poor man. He, however, did his best whenever the two men came to him for help. The help needed was to know how their future would be. They wanted to know if they should travel to Lagos or not. Mr Biu was very happy. ‘You have done well my sons. I am sure your father will be happy with you. He will also be happy with me because I promised him that I will not leave you,’ he said.

He consulted the oracle. Suddenly, he became disturbed by what the oracle said. He adjusted his chair and looked into their hands again. This time, he was satisfied. He faced James and said, ‘You will be a rich man. A lot of people will come to you for help. You will be famous.’ James was very happy and he left rejoicing. ‘At least, Lagos will be good for me, he thought.’  ‘What about me?’ John asked.  Mr Biu became sad when John asked the question. He did not know what to tell him. But he had to tell him the truth.  ‘I am sorry; the oracle says you will be poor. But don’t worry; your brother’s wealth will be enough for the two of you. You just try and support him.’ Mr Biu said.  When they got to Lagos, James lived a careless life. He did not work. Instead, he woke up every day telling people about his wealth prophecies and promising them something. He was waiting for the day the message of the oracle would come to pass in his life.  John thought to himself, ‘If I stay in Lagos, how will I make it? I will go back to the village to work on my father’s farm.’ So, John went back to the village and started to plant maize and cassava.  During the first year, he had a great harvest. He was very happy. He sold the crops. He bought more lands and employed more people to work on his farm. Then, a famine broke out in the village. People came from far and near to buy farm produce from John. Everyone in the village talked about his goods.

They confessed his crops were very good harvest. The news soon reached the neighbouring villages. This made him popular around the village. He was very happy that during Christmas, he organised a feast for his workers. All his workers liked him because he was very kind. He sent a message to his brother to come to the village, but his brother could not come because he did not have enough transport fare.  This really made John sad that he sent some money to his elder brother. When his brother got to the village, he began to cry. He cried because he did not expect to see his brother in such wealth. He was also sad because he did not have any money. He rushed out of the house and went straight to Mr Biu’s house. When he told Mr Biu all that happened, he laughed. ‘Lazy boy! How can you be rich when you are not working? You think the oracle will come and give you money in your room? No!’ Mr Biu shouted at him. ‘Burr…’ James mumbled. Before he could finish, Mr Biu slapped him. ‘Shut up! What will I tell your father? You lazy man! Go out and look for something to do before it’s too late.’ Mr Biu went out and left him crying.

Step 2: Teacher reads out the story to the pupils

Wrap Up (Conclusion): Teacher goes over the topic once again for better understanding.

Assignment: Create a drama sketch of your own from the story.

Learning Objectives: At the end of the lesson pupils should be able to:

1 explain what a stage is.

2 identify staging requirements of a play/drama.

Resources and materials: CULTURAL CREATIVE ARTS for Primary 3 by A K Badaru

Building Background/connection to prior knowledge: pupils are familiar with stage performances

A stage is a place where plays are acted or performed. Staging in drama is the real representation of a play or acting. A stage can be designed to represent the market place, sitting room, school, office, kitchen or motor park. There are different people and materials important in the performance of a play. They are called the stage requirements. 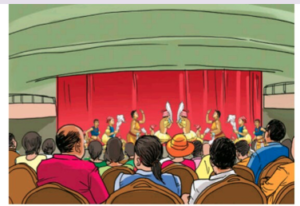